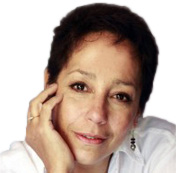 Samira has a long track record in factual programming, mostly at the BBC. She has worked on many flagship series including Omnibus, The Late Show and Everyman. She has also been a Prouder Director on Home Front, The Works, and House Detectives. Samira has been a Commissioning Executive for BBC Four and was series Producer of The Talk Show. She has also produced a number of drama documentaries including Alive: Crashed in the Desert for Channel 4, Science and the Séance; A History of Spiritualism for BBC2, Brilliantly British: Josiah Wedgewood/William Morri and In Search of the Brontes for BBC1.

Samira has written number of books for Young Adults under the name Sam Hepburn. Her latest crime thriller Chasing the Dark won the Stockport Mad About Books Award and her new title If You Were Me comes out in April 2015.